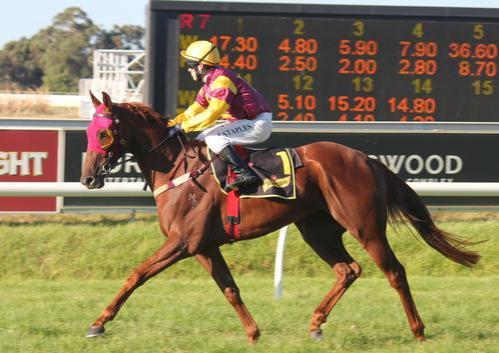 Flag Officer did us all proud yesterday in leading in the Derby and taking it right up to the opposition, kicking clear at the top of the straight only to be caught by Rohan, who looks like the dominant three year old in WA, and two horses who had the best runs in transit. It was a day that no leader led and won but Flag Officer gave it his best and all the horses that were in the leading group dropped out of contention in the straight except him. We're very proud of our boy who has pulled up in fine fettle from yesterday's run. Congratulations and thanks to Craig Staples who again rode a terrific race and also for all his help at the track in the mornings because Flag Officer is a little bit wayward in track work.

The photo is of Flag Officer going to the barriers before the start of the WA Derby.