A GREAT DAY AT THE TRIALS! 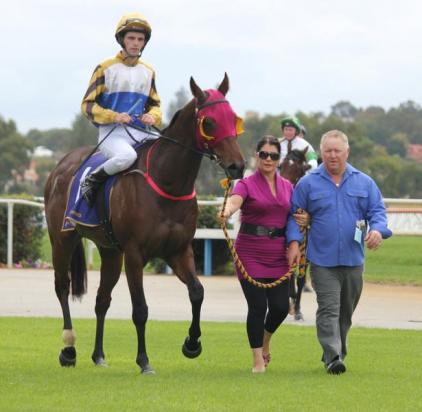 Right Time and Coruscation both won their trials in fine style and Truth Conquers put up a promising performance for his first trial.

Right Time jumped well, winning his trial in good style in the fastest trial of the morning. He looked very much like the Right Time who won four out of five in the winter.

Coruscation again showed what a super raw talent he is by bounding from the gates and running to the line under a tight hold in a good time. His immediate aim will be the Magic Millions two year old race over 1100m on February 16th. So we'll be keeping everything crossed, hoping he gains a run as an unraced horse. If he doesn't he will race the following week.

Truth Conquers had his first trial and was very pleasing in his effort by jumping quickly, holding fourth spot. He was a little green in the run home and I expect this trial to bring him on in leaps and bounds, both through the experience he received and the improved fitness.

The photo is of Right Time returning to scale.