WILL CORUSCATION BE OUR NEW SHINING LIGHT? 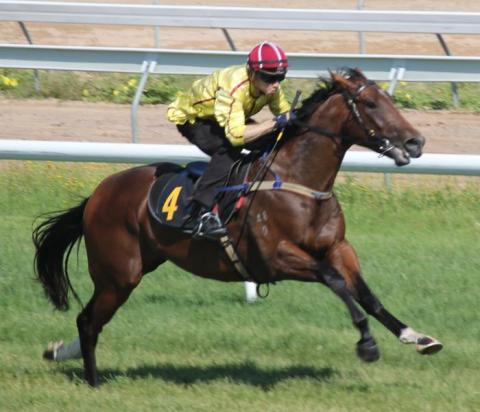 At Lark Hill on New Year's Eve we trialled two of our two year olds, both gave extremely pleasing performances.

Coruscation won the first trial in fine style. He jumped well and showed good speed. Halfway down the straight he caught sight of something on the inside rail and did a right-hand turn but it didn't take long for Steve Parnham to straighten him up and he went to the line full of running.

Dane Mi Hero also trialled well in running third in the second trial which was the fastest one run. He was beaten three-quarters of a length after jumping in the air a little at the start but quickly gathered himself and ran on well to be beaten by two horses that had trialled before and had blinkers added to their gear.

It was great to see so many owners make it to Lark Hill on a really hot morning but I'm sure they will all think it was worthwhile making the trip. Once again, Laura and I wish everyone a happy New Year and loads of winners.

The photo shows Coruscation striding to the line.