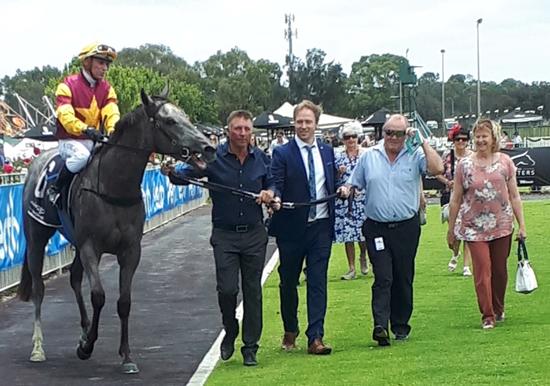 It was a great effort by Mindarie yesterday to win her first start in a race. Although she had solid trial form she had been plagued by a cold but in the last two weeks had shaken it off and she showed improvement in the stable and in her work so we were fairly confident of a bold performance on Saturday.

This makes six foals to race and six metropolitan winners by our terrific broodmare Clarecastle. She has been an exceptional broodmare, hardly missing a year and throwing good, sound offspring. She has a Warchant filly that's a yearling now but unfortunately she lost a full brother to Mindarie and Specialism about a month ago but she's now back in foal to Safeguard. So it's not always beer and skittles, there's often some heartbreak when breeding and growing young horses.

The photo is a picture of Mindarie being led in by a group of people who once were clients but now have become close friends too.