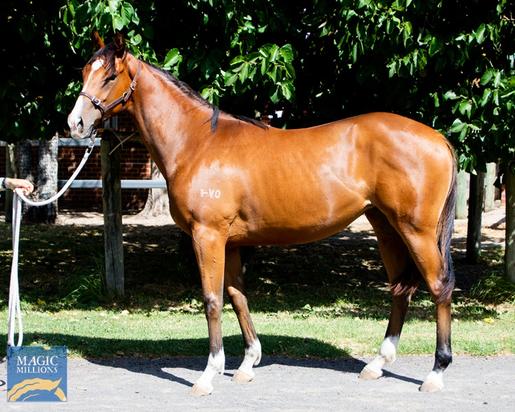 This filly will be our LADIES horse for the new season to take advantage of the bonuses available. Her profile should suit these conditions as her sister won the Initial Stakes and then the Gimcrack in her two year old season and she looks like an extremely quick individual.

She is by Demerit, a son of Lonhro, (champion horse). Demerit is getting fast two year old fillies with close on 70% runners to winners.

She is out of  Female Agent, a winning mare by Commands, who has had two foals to race and they have both been quality racehorses. She is a full sister to Agent Pippa who won the Initial Stakes clearly and then was taken to Melbourne to compete in the first two year old race there. Unfortunately she got travel sickness and came home without racing. Then she started again in Perth and won the Group 3 Gimcrack Stakes and was third in the Supremacy Stakes. She was also crowned Belmont Horse of the Year before being sold to Eastern State interests where she has raced well and has won more than $400,000 in stakes. Their older brother, Double Digit, won ten races and more than $350,000 in stakes and he is still racing. This filly is a very strong individual and is a great walker with an enormous over stride and gives every impression of a fast early two year old.