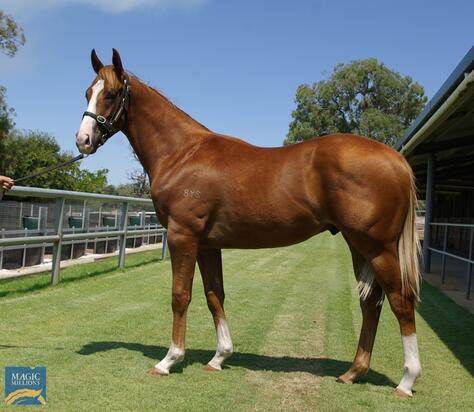 This chestnut Patronize colt is a particularly strong, great walking colt with a huge overstep as he strides along. His sire, Patronize, is the son of champion racehorse and sire in Redoute's Choice who has been a tremendous influence on Australian racing. He's producing more than 72% runners to winners. He's also very well bred by being a half brother to another champion sprinter and sire in Exceed and Excel. So this colt's sire line makes him a true blueblood of the Australian turf. He's out of the Bletchley Park mare Movie Queen who has produced two winners who are still racing. Bletchley Park himself is proving to be a terrific broodmare sire. This colt has also the influence of Golden Slipper winner Rory's Jester close up on his mother's pedigree. So he has two Golden Slipper winners in his immediate family. Most good judges will say you have to have champion sprinting influence close up in the horse's pedigree to produce a superior racehorse and this bloke's pedigree fulfils that criteria. We're going to race this horse as our ladies only horse to try and take advantage of the prize money available at the Magic Millions two year old race next February. So girls, come and join Laura and race this exciting colt. For more details ring me, Paul Jordan, on 0417966712.