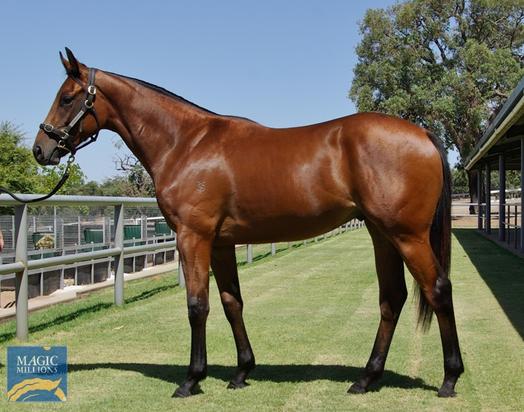 This colt is a male version of his mother when I bought her at the yearling sales a few years ago.

He is by Warchant who has had a tremendous season this year. He's had the WA Guineas winner and the outstanding Dance Music and a host of other winners. His progeny were in great demand at the sales, in fact one topped the sale at $240,000.

He is out of Passion Cantata a six times winning mare by Oratorio who was Group placed in the Lee Steere Classic Group 3, amassing more than $300,000 in stakes. She's by Oratorio who has been a terrific influence on juvenile racing in WA, having sired winners of three Karrakatta Plates and almost every two year old race on the WA programme. I bought Passion Cantata not only on pedigree but on the quality of her looks. In fact I thought she was the best filly at the sales of her year. She has one horse to race which is the very promising Power and Passion who won late in the two year old season and was placed on several occasions after. He is back in work and I expect him to trial in the near future.

This colt is a real quality individual carrying the strength of Warchant with the classic frame of his mother. He's a great walker and he moves with eloquent ease in the lunge room. I'm very pleased to make this colt available to our clients and if you have any interest please ring either Harvey or myself or enquire via the website and we'll get back to you.