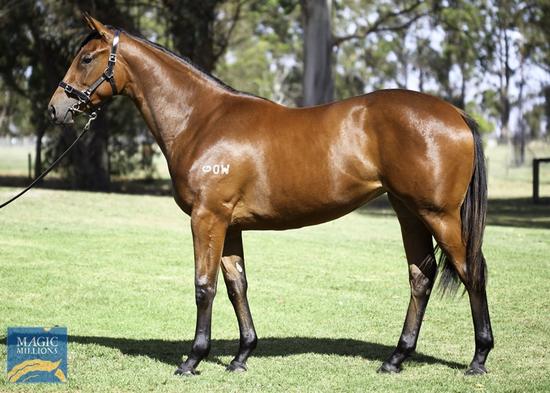 Sire: I'm All The Talk Dam: Just As Beautiful

This is a strong, precocious looking filly.

She's by I'm All The Talk who won the Skyline Stakes at Randwick at two and was a very fast horse. He is by the Golden Slipper winner Stratum who has had a terrific career at stud. She is out of I'm All The Talk's second crop and I've had two from his first crop in the stables. One of them, Convention, won a trial by 6 lengths, and the other one, Datalka, ran third in the Initial Stakes and second in the next two year old race of the season. Both are now spelling. I was very impressed with them in the stables as they both ate well and were very manageable, in fact, it seemed like they'd done it all before but of course they hadn't. Every time they were challenged they rose to meet that challenge easily.

She's out of Just As Beautiful who was a two time winner at two and ran third in the Group 3 Black Opal stakes. She is the dam of Salade who won the ATC Pago Pago Group 2. They are from the very strong two year old family of Tropical Affair who won the Maribyrnong Stakes and Prized Icon who won the The Champagne stakes and many other two year old and high class winners.

She fits in the mould of being by a fast horse out of a very good two year old family and is poised to take full advantage of the Westspeed bonus schemes offered to participants in WA.

If you are interested in this filly please ring either Harvey or myself or make a request via the website and we'll get back to you.